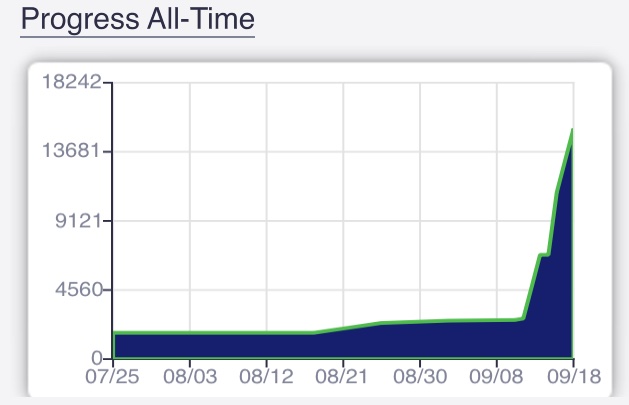 2016 was a different time. Online everyone was upset by the death of a gorilla and enthralled by a man wearing a pair of white Vans. There were a bunch of clowns terrorizing people for no good reason. And as was the custom at the time, we had a Presidential election.

Looking back on the run-up to the 2016 election it’s easy to forget that Trump seemed to be a joke candidate. The idea of him actually winning was unfathomable, and everyone thought it was just going to be a dumb footnote in a long history of dumb things America has done.

I know I certainly did.

So why not have some fun with it?

Disclaimer: I do not agree with Trump's policies, nor do I support him.

I joined up some Trump supporting Facebook groups to see what was going through the mind of his supporters. In turn, I saw people openly posting extremely racist memes, horrific opinions, and overall some of the more hateful comments that I have ever seen online… and that’s saying something. 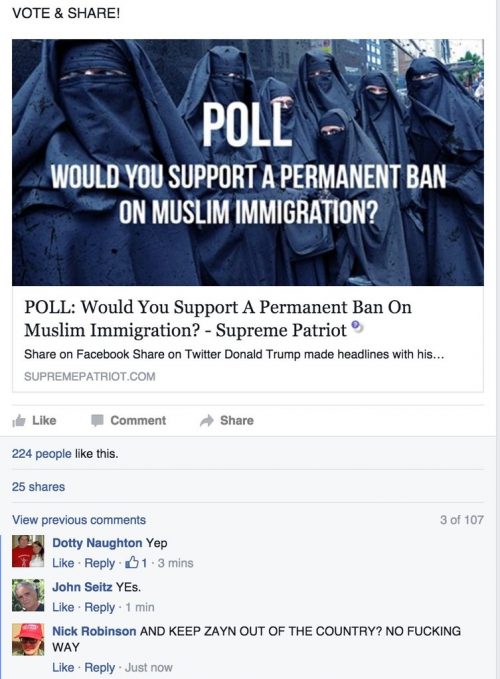 I would post and try to ruffle the feathers of these people that I thought were fringe right-wingers.

I ended up getting kicked out of a few groups. Some turned into Q-Anon groups.

Ultimately, some would post about using Trump’s App, “America First“

With how quickly our technology has changed, it’s very easy to forget what things were like before we had certain advancements, and how long it took things that are now commonplace to catch on.

In 2016 Trump’s core audience of Boomers had smartphones, but they kept it simple and didn’t have the level of proficiency they have today (spurned on mostly by their posting about Trump on Facebook). The app had to be extremely simple and had to focus on two things:

Realistically this is the goal of any political campaign (certainly more than winning and governing), and because of Obama’s victory being credited to “big data” and “only canvassing” and only buzzwords, the Trump campaign decided they had to get an app… and they had to get it as quickly and as cheaply as possible. 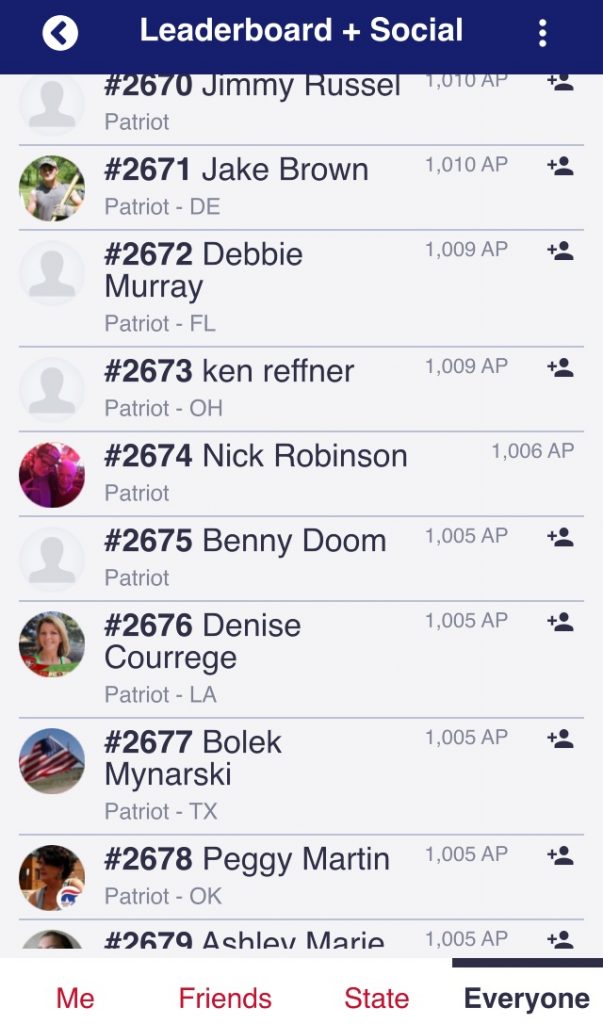 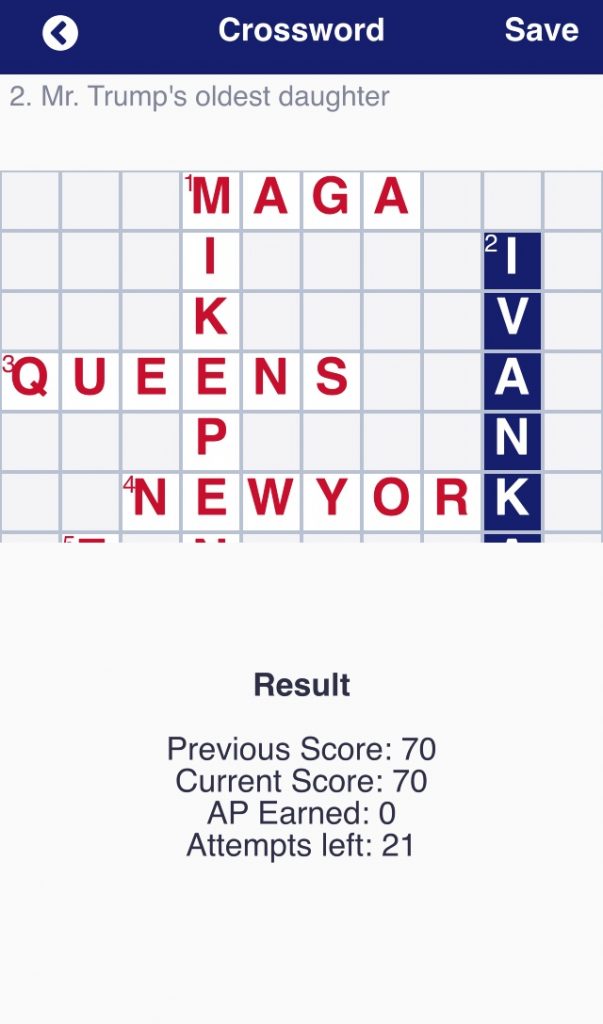 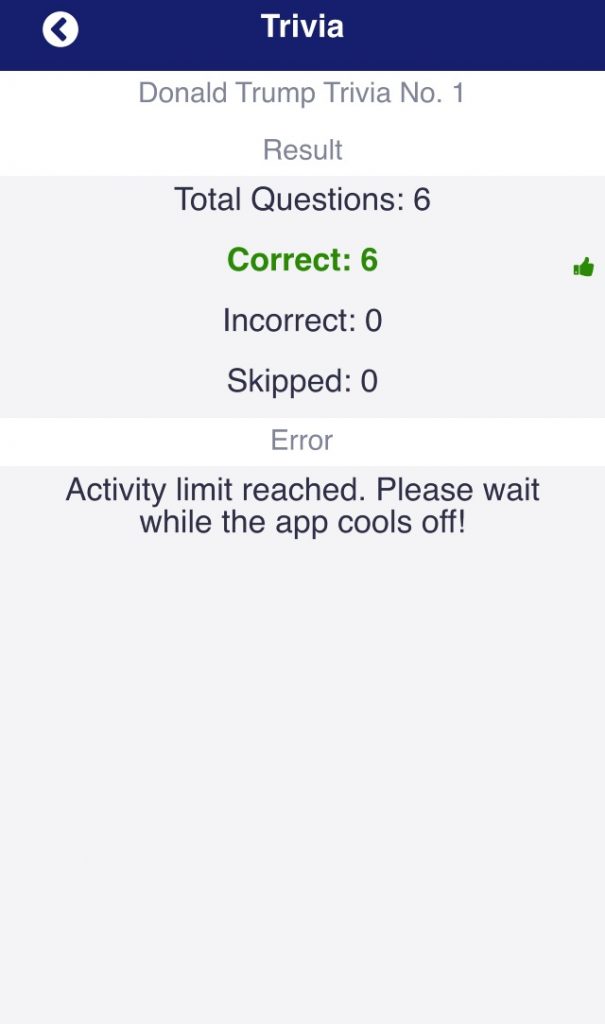 The app worked simply: You would open it up and be presented with a leaderboard of who loved Trump the most. The top few slots were given to Trump superdonors and family members – the “game” was clearly rigged.

The first thing the app would do is connect to your Facebook account to “establish an identity” for you – and draw out who your contacts were and try to target them with advertising. It would then pull in your contact book so that you could “refer your friends” for big points. If your friends didn’t want to support Trump’s virtual endeavors, as mine didn’t, you could do a few things like watch an ad for Trump, do a Trump-themed crossword puzzle, answer some absurdly easy trivia questions, and “check-in” daily, all for a few points. The points would add up and you’d get titles under your name like “Trump Train” and “MAGA”, and even the absurd “TrumpForce1”.

There wasn’t much discussion on the app – there were no message boards. Any messaging had to be done through a DM. In that regard, this was actually one of the least toxic Trump-based platforms that I found.

That said, they didn’t understand social media that well… Here’s what happens when you tried to send a tweet with the default message in the app:

If they couldn’t have prepared for the length of a tweet, I was willing to bet there wasn’t a lot they were prepared for…

Mostly the app wasn’t fun. You could log on and check in and do a crossword puzzle and watch an ad with the sound off and make a few points, but beyond that… Nothing much was going on. You got 5 points for adding a friend, but adding them didn’t really do anything. No crazies to interact with, no places to post up a pic of Hillary or anything. The app would stall out if there were too many user interactions – if somebody logged on and did their daily check in, trivia, and crossword puzzle all at once, the app would not award points. It was prone to not working at all because too many users were on it. It was annoyingly slow. It was shoddy and frustrating.

I wanted to move up that leaderboard. I didn’t have any plan to, but I knew that it would be fun.

Additionally, the points you earned would be redeemable for free merch. I thought it would be hilarious to get a bunch of it and then wear it two years later, like how you can wear Nixon stuff now and it’s hip and ironic. Throughout the lifespan of the app the merch store was always “coming soon”. Nobody ever got anything from this app.

The first point of attack was referring a friend. The app gave you points once a day for posting to your social media accounts. I posted a couple of times on my legitimate ones before creating burner accounts to post on. Easy enough, I was already increasing my point count.

Looking at the activity (for some reason ALL user activity on this app was public) I could see that most people were moving up in the app for referring people via text message. These were legitimate people telling their friends that they needed to get on the app and support Trump – I couldn’t compete. While the app gave big points for every person you referred, it also gave you points for every referral you sent – no matter what, as long as the numbers were legit – no (222) 222-2222 or anything easy like that. At first I would just type in whatever number I had laying around, an old friend, a pizza place, doctor’s office, whatever. I felt bad for sending people these messages however, so using publically available burner numbers solved that problem quickly.

But just sending out referrals wasn’t going to propel me up the leaderboard. Sure I could refer myself to my Google Voice number, and some of the online burners let you use them as spamboxes and I could work through that… but it was going to be a lot of time and effort that I wasn’t looking to spend.

Consistent with the quality of the Trump app, it also would fluctuate on how many points it would give you for a referral. 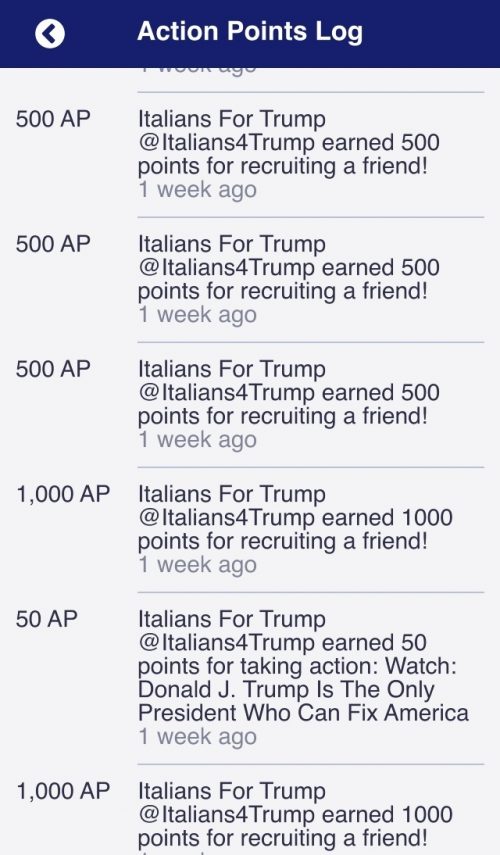 So what could I do? Spending actual money was completely out of the question…

The Trump App (I never called it by it’s real name) rewarded his loyal people: those who volunteered for him and who were most likely to donate money – the people who would attend his rallies. And these points never fluctuated – 2000 per check in. All you had to do was get to within 100 yards of a volunteer center or rally and check in.

Living in Los Angeles, there wasn’t a volunteer center, nor any rallies that came through, and either way, I wasn’t going.

So, I did the only reasonable thing to do – I re-jailbroke my phone.

I’ve jailbroken my phone off and on for years, mostly because it took Apple forever to add rotation lock as a feature. As iOS has improved over the years there’s been less and less reasons to do it, and it’s gotten more difficult. But one feature Apple will never add to the stock system is location spoofing. So I spoofed my location to check in at a Baton Rouge volunteer center. 2000 points. Just like that. There was a rally in Tampa that day… Would the app be smart enough to know that I couldn’t have possibly traveled 500+ miles in less than ten minutes?

Before long, I was the #1 Trump influencer in Louisiana. 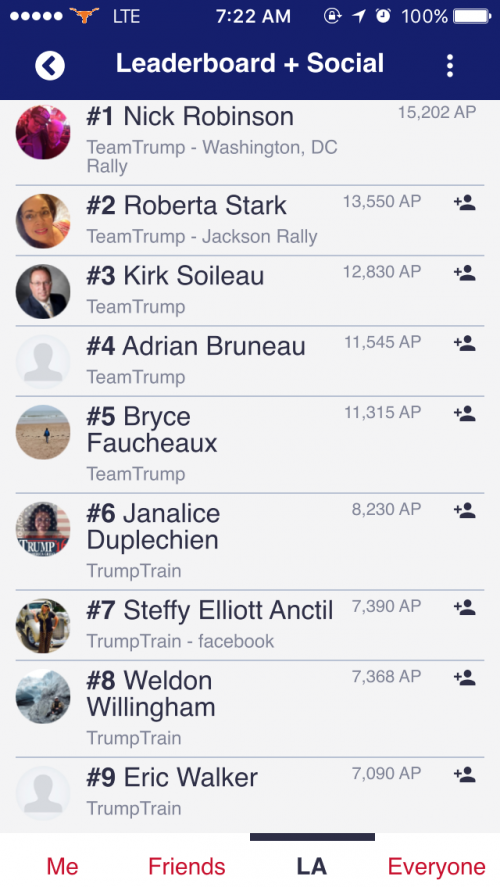 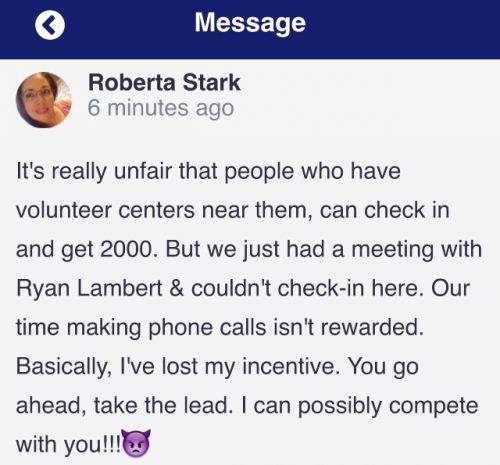 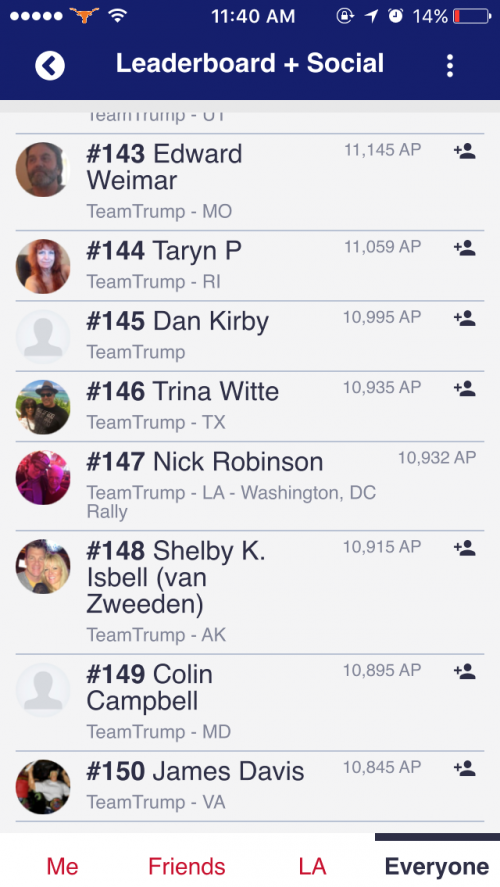 Given that most people couldn’t attend multiple rallies, volunteer every day, or spend large amount of money, it wasn’t that hard to break through into the top 150.

In retrospect, it’s crazy to think that I didn’t trip any internal alarms given how rapidly I was able to accumulate points and rank. What I was doing wasn’t physically possible. 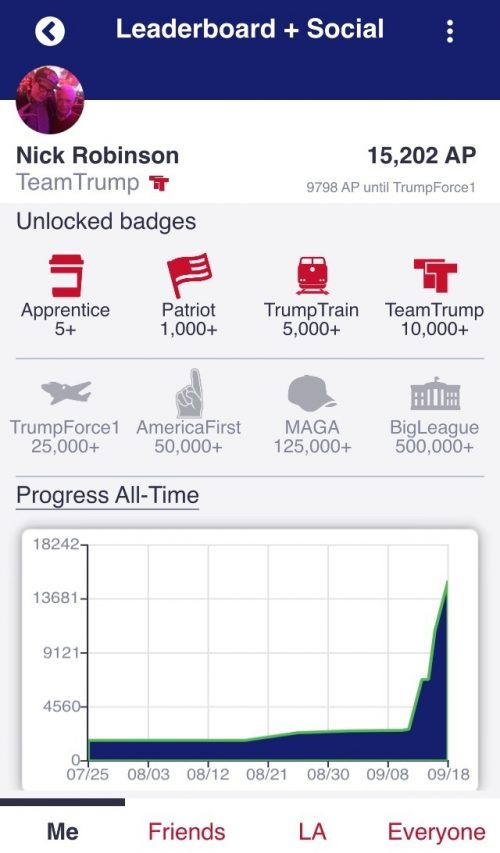 Soon I was effortlessly shooting up the ranks of the Trump faithful.

In retrospect, it’s crazy to think that I didn’t trip any internal alarms given how rapidly I was able to accumulate points and rank. What I was doing wasn’t physically possible.

So, every day I would spoof my location, check in for my “volunteer shift” in Baton Rouge and then check in to the one or two Trump rallies that were being held, no matter the distance.

A couple of weeks before the election the app removed the ability to check in completely. I suspect I wasn’t the only one spoofing to rank up on the app. There was another account that I suspected of doing it, but I won’t share them because of their horribly offensive username and profile pic (this sort of thing was not uncommon on the app).

Eventually I found myself ranked at #23 on the app, jockeying between accounts that were donating decent amounts of money for points. 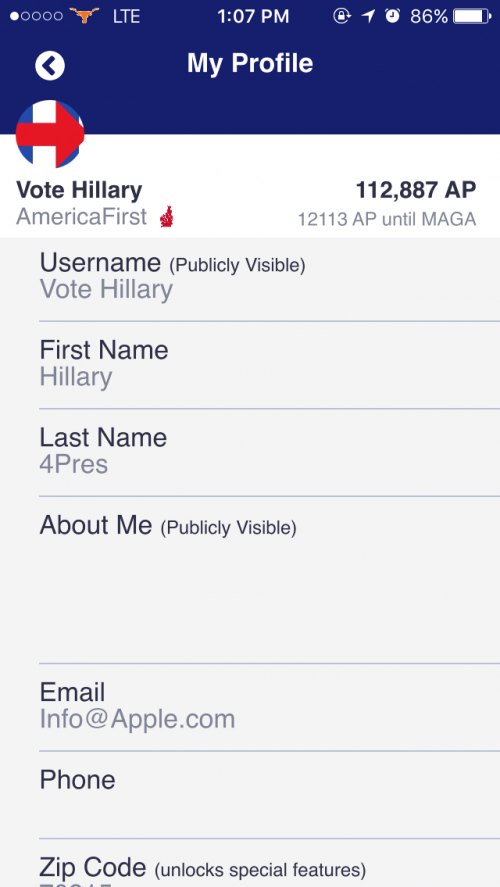 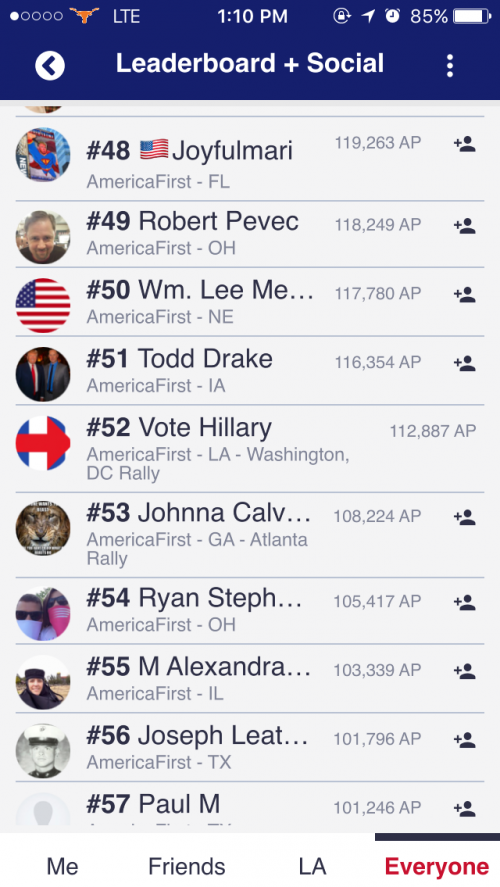 I had to let all of my “friends” know the facts – I was upset that the promised perks of the apps, such as free merch, was never delivered upon. I was upset that despite my performance I had never gotten a shout out. And mostly… the performance of the app had killed my enthusiasm for Trump so much that I wasn’t going to vote for him anymore. Bad apps cancel votes. 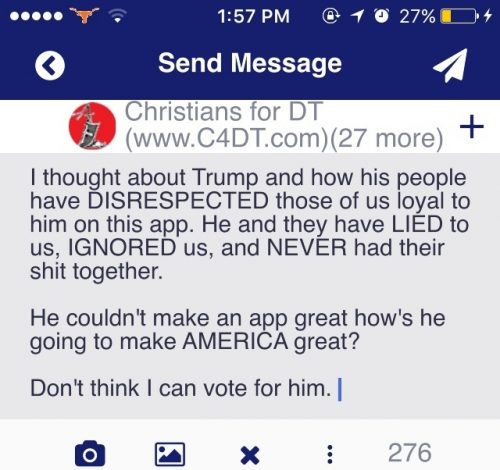 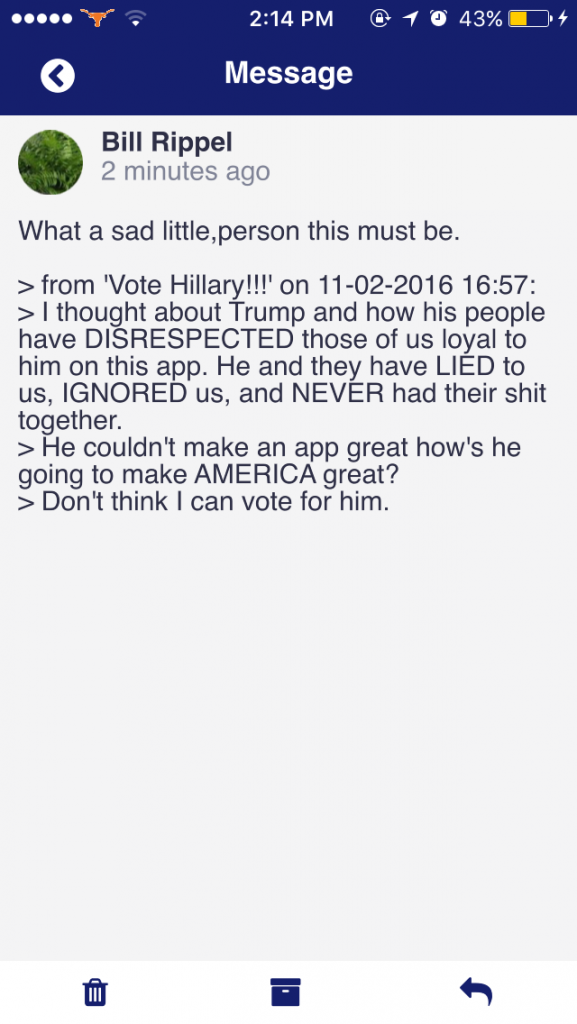 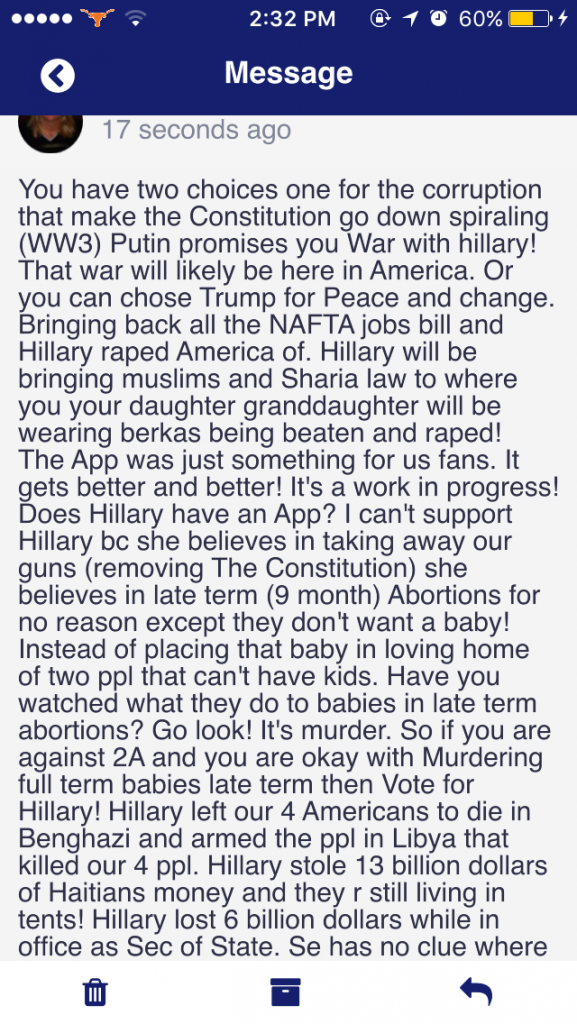 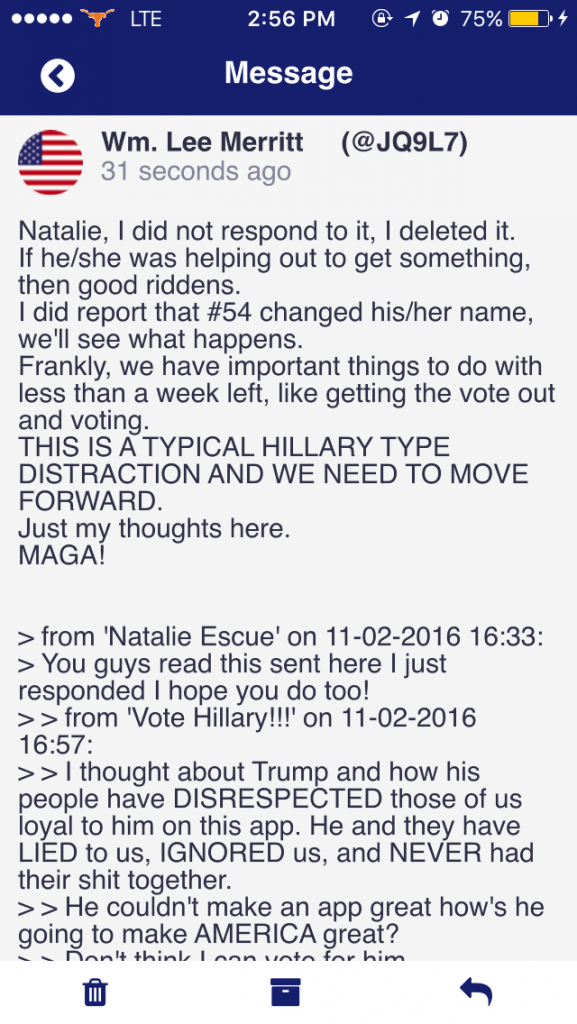 I didn’t last much longer on the Trump app. However, I did last over 2 hours, which was actually much longer than expected. 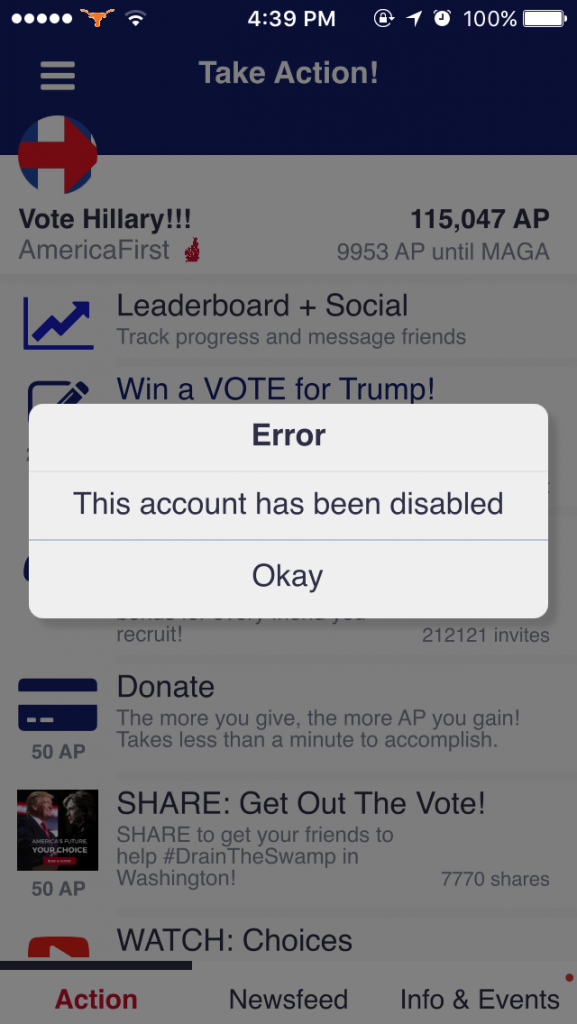 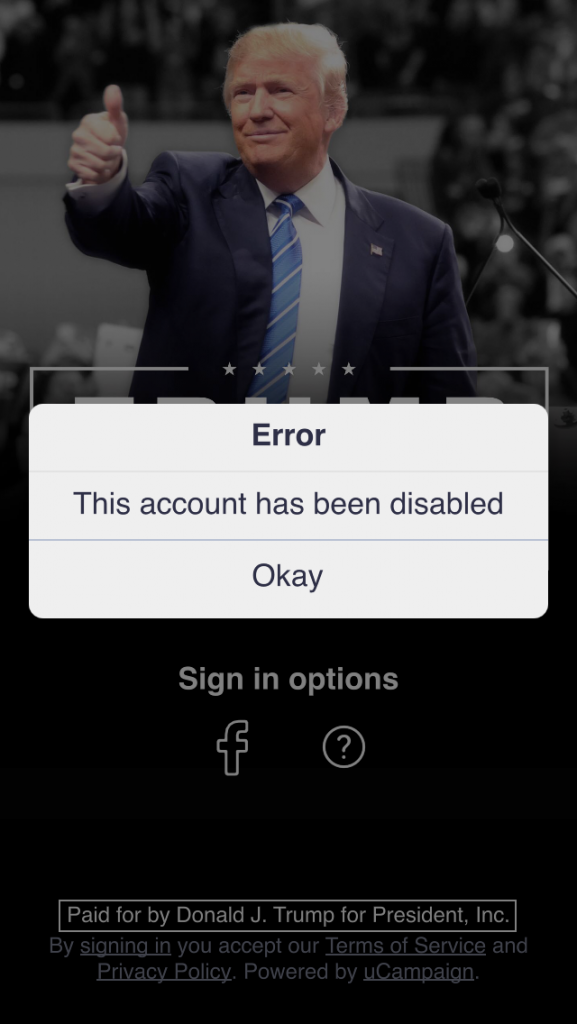 And that was that.

A few days later Trump shocked everybody and pulled out the upset.

Maybe the app helped. I doubt it, but… anything’s… no, it didn’t help anything.

Four years go by. We all know what happened. Trump ran for re-election, so naturally I downloaded his new app to see what fun could be had… 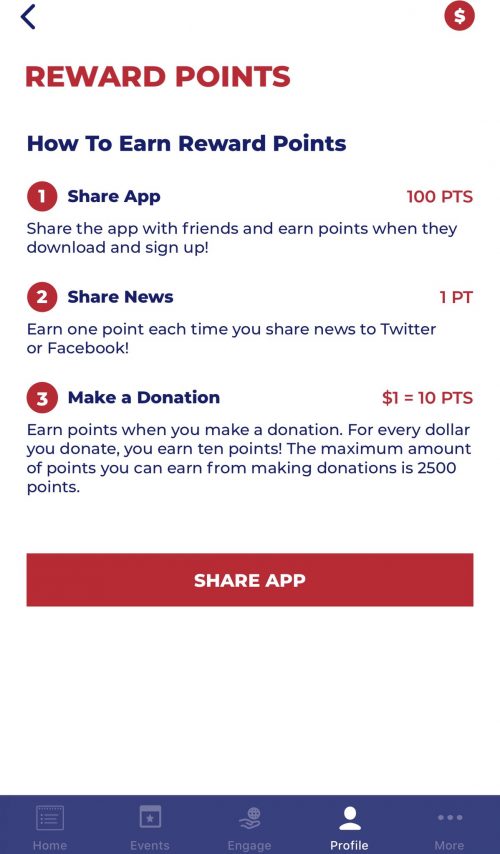 No social. No games. No competition. You could give Trump some money and… that’s it. Read some news. What a waste.

To top it all off – you could only earn 2500 points from a donation. The cheapest item in the store: 5000 points. At least they were being honest that they weren’t going to give you anything this time.

I guess they learned their lesson.